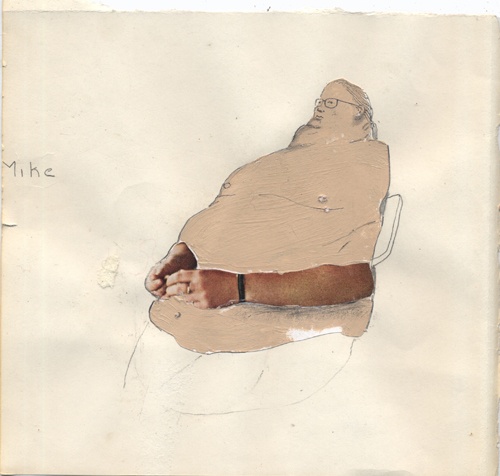 Mike
Collage, pencil and acrylic on paper
next >

Laura and I drove a long way the day we moved from our tiny apartment in Boston to our “dream home” in Cleveland. We could have called it a night and slept at Laura’s folks house, but we were far to excited and decided to drive further and spend the night in our new apartment. We drove through the beautiful, lit-up streets of little italy and pulled into our new driveway. Breathlessly we ran up the stairs to our apartment. Our heads were filled with dreams of our new life, all of the friends we would make, the amazing people we would encounter. Would our neighbors be artists? Writers? Professors? Our first glimpse of our new life, the one we had left Boston for, was Mike and Tom sitting on the porch.

Mike and Tom were brothers. Big brothers. Brothers with a combine weight of close to 800lbs. Mike and Tom were both nice guys. They were nice enough. Mike and Tom chain smoked and were never spotted without a handle of vodka. Mike and Tom ended up being my neighbors at Joe’s place; they would call me up on my way home from work and would ask me to pick up some groceries. I always obliged. These two guys never got past the back porch, so I felt it to be a humanitarian mission in a way to pick up a few items for these poor bastards.

The Grocery list: Meat – Some Pasta- bread- milk-3 liters of vodka. A carton of cigarettes

They promptly paid me with some cash from a yellow stained envelope with a return address with the Federal Disabilities logo on it. After a few trips I felt as if my neighborly might was wearing out its welcome and I think they felt it as well. Instead of laying on the charm they soon just gave up and plainly asked me to pick up some vodka for them.

Mike would chain smoke with his oxygen tank tubes over his forehead, and dress himself up by putting on a Mumu (though he would never bother to button it) Tom on the other hand never cared as much. Tom simply kept his inhaler on the plateau of his hairy belly, never bothering himself with even the idea of a Mumu. The amazing thing that I feel the need to mention is the fact that out of all the times I went to visit Mike and Tom I never saw their genitalia. I never saw them vertical, so in effect their stomachs provided a canopy for their junk.

Mike died at one point .Tom was so depressed after his brother died that he gave up all sense of caring (I don’t how this is possible) and was put into a hospital. Soon thereafter, due to Tom’s lack of self-care, he had to have his legs amputated due to complications with diabetes.

I don’t know what ever happened to Tom after that.