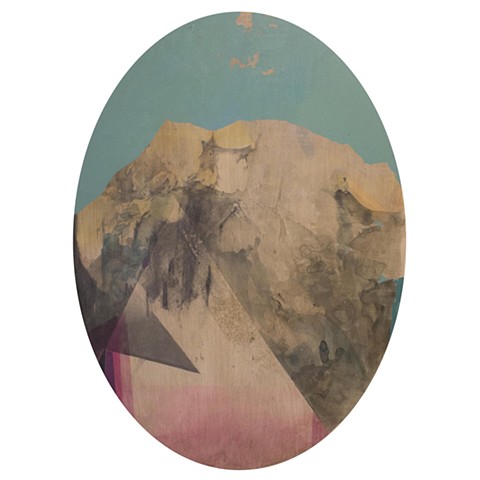 Gallery info at MARKLEIBNER Montreal Andy Curlowe’s artwork deals with the juxtaposition of nature and industry. Influenced by the mountainous landscape of his childhood, Cleveland’s industrial shadow and the sublime power of nature to both create and destroy, Curlowe’s paintings are a balance of structured lines and the ambiguity of billowing smoke. These works explore the blurred boundaries of natural forms and planes encountering the sharp geometry of human calculation.

Geo-forms saturated in color, dance and grow amongst natural forms, which flatten as they expand. Lines streak in and out of focus inferring an architectural vernacular. Each line narrates the illusion- all while emphasizing the void.

As society struggles, so does nature, yet we are one and the same. As humans, we struggle in vain to separate and distinguish ourselves from nature, these paintings seek to demonstrate the destruction, innovation and layered heritage of our landscape.

Andy Curlowe was born on the other side of the Mohawk River from Schenectady New York, a region that resides between the Adirondacks and the post boom remnants of industrialism. Raised by a wildly independent and creative mother, Andy and his sister were encouraged to wander the woods and paint teepees made from old bed sheets. Andy studied painting and drawing at Montserrat College of Art in Beverly Massachusetts. Soon after graduation, Andy and his wife Laura moved to Cleveland Ohio, in search of affordable living and studio space. There they discovered a dynamic and approachable art scene. After living and working in Cleveland since 2006, Andy feels a strong connection to his adopted city. Andy's work references the landscape's of both his present and past. -Andy