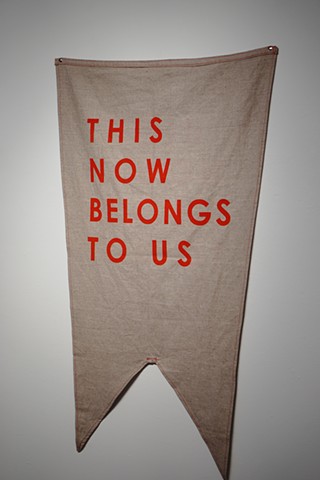 Reclamation Flags
Screenprint on Linen and Canvas
next >

In 2013 I was invited by Zygote Press to participate in their A.I.R. (artist in residence) program

These are some of the printing that I did while I was there.

This show is about transition, ownership and identity within the context of Cleveland’s history and landscape. Cleaveland, the exhibit, is comprised of three main elements; a smoke cloud formation, flags boasting declarations of ownership and pronto plates mixing nostalgia, abandonment and abstraction. In creating these works at Zygote, on presses reincarnated after the end of their commercial necessity, I was absorbed and surrounded by the history of industrialism within this city- how mass production and printing created a steel and concrete framework which Cleveland’s current inhabitants and artists have inherited. This inherited ownership is ownership none-the-less and comes with great austerity and responsibility. While the majority of our factories are no longer in production, the smoke cloud of industry has lingered. While the booming populous of Cleveland has dwindled, the landscape and identity of the city continues to be reinvented within the abandoned storefronts and in the shadow and repetition of smokestacks. As the North Eastern Ohio landscape was claimed, “This belongs to us now”, by the likes of Moses Cleaveland, blank canvases bloomed into an industrial landscapes where production led to massive growth, destruction, embarrassment and abandonment- only to be rediscovered and reclaimed by todays inventors, dreamers and artists (always willing to see the potential in the volcanic ash of their city). In the pronto plates, iconic Cleveland images are portrayed. Images printed many times over in every newspaper, personifying the shame and abandonment, have become as familiar as the baseball cards distributed in every cigarette pack, cereal box and candy store. Cleaveland, shortened by necessity into Cleveland; our city’s past informs our present. Like a smoldering volcano, the smoke clouds of industry reference our cities heritage of pollution and productivity; creation and destruction. This now belongs to us. We are the caretakers, the re-inventors. Ownership is continuously claimed and identity reborn.